Have you ever tried to teach your child to identify a triangle? You might begin by showing her several different types of triangles. Interestingly enough, a second step is to show her a square. That is, in addition to demonstrating several examples of triangles, you also need to show her what is not a triangle.

In instructional design, we describe this as showing learners both examples and non-examples. In other words, show them the concept you are teaching and then show them the opposite.

Recently, we applied this instructional method to a DecisionSim simulation on communication strategies. Throughout the simulation, we bring learners through several cycles of exploring examples and non-examples of best practice strategies to interview patients.

What does this look like? With each cycle, we begin by presenting a situation, such as a short video clip in which the primary care provider begins the interview. When the video stops, learners must choose which question to ask next. From the two possible choices, one question is an example of best practice, and one is…not so good (a non-example).

For each option, learners are branched to a new screen, where they watch a video in which the primary care provider asks the patient the learner’s question. Learners can then observe the conversation either go very well, or not so well. In each case, learners then proceed to a screen where the mentor encourages them to reflect on the interview, and identify what factors contributed to the outcome. If learners choose the non-example path, they are then directed back to the initial screen where they have to choose the best practice example. This ensures they see the video clip that models best practice and then reflect on why that is the better option. 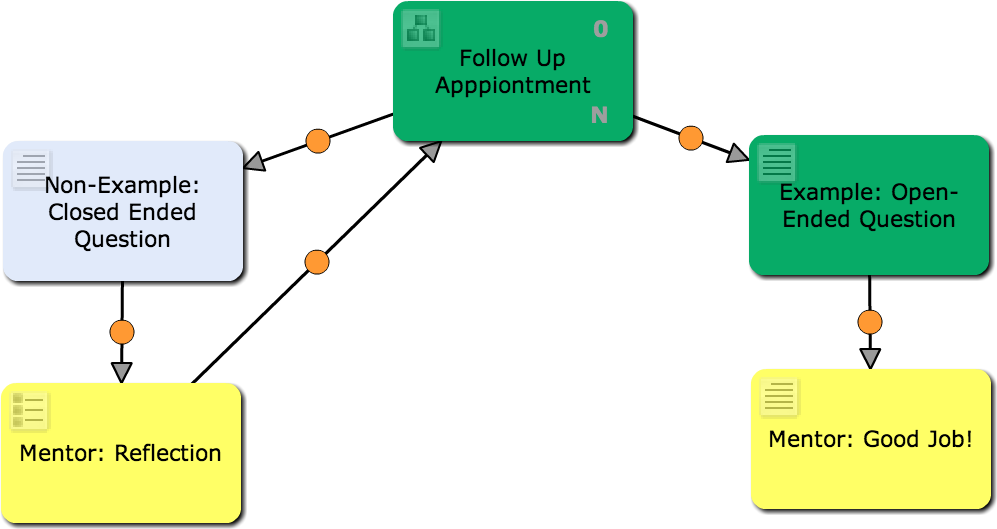 While I was demonstrating this approach to an subject matter expert, she responded, “Learners will probably enjoy going down the wrong path even more than the right path!” This is just what we want, because it encourages an exploratory learning process and ensures learners will see both the example and the non-example.

This approach is optimal for teaching concepts and can be used for any level of media, whether it’s video or voice over or simply text and graphical images.

Schedule a live demo and plan your simulation program